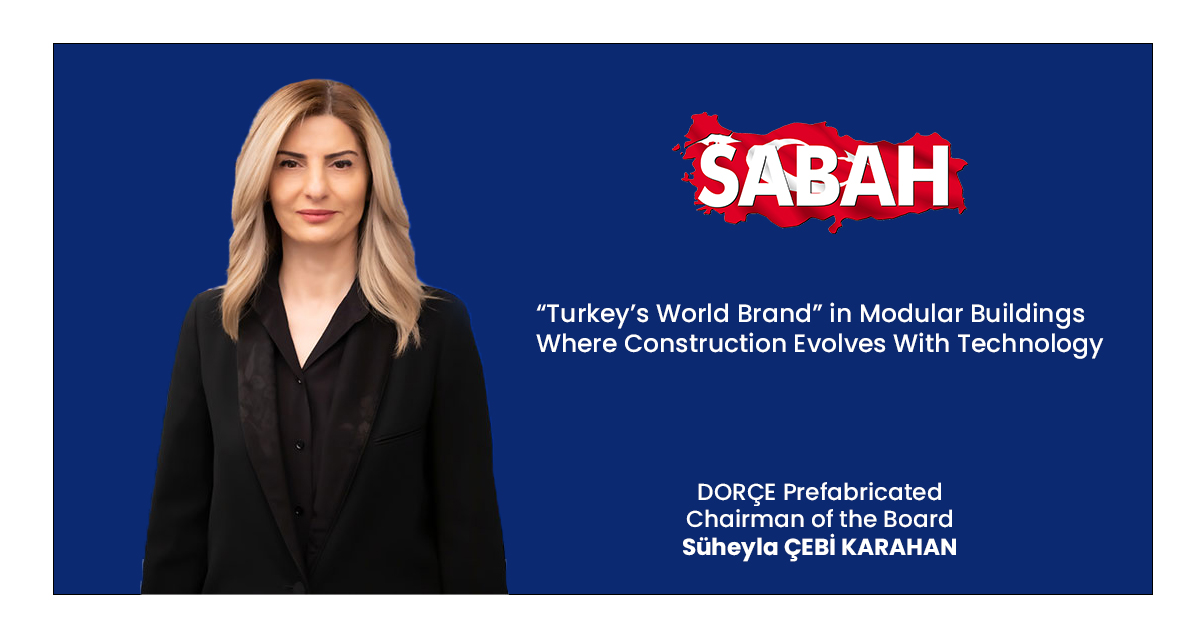 DORCE, with production, export and international contracting operations, is one of Turkey’s strongest brands in the global market. Beside this, DORCE is one of the first established and leading companies in the prefabricated modular steel structures sector of Turkey. We, with 38 years of experience, complete our projects in many regions of the world under severe climatic conditions in the way we meet every need with our own engineers on turnkey basis; Engineering, procurement, production, logistics, assembly, infrastructure and superstructure works, testing and commissioning.

“At the point we have reached today, DORCE, with its factory complying with local and international quality standards, is Europe’s largest prefabricated modular buildings manufacturer. DORCE has become a sought company with the motto  “DORCE can where others cannot” in projects that require engineering, organization and speed capability with project-based turnkey solutions.

In all international projects superstructure is realized by exporting prefabricated modular steel structural elements which are produced in factories in Turkey. We have exported to more than 60 countries since the establishment and we have companies in 15 different countries. Even during the pandemic period, we export to 6 countries.

If we handle the subject within the scope of earthquake resistant urban planning and earthquake culture awareness; high-rise residences, dwellings, hotels etc. are made using Prefabricated Modular Steel produced by quality control in the factory and designed in accordance with the soil structure in developed countries due to the flexibility provided by steel during an earthquake.

In regions with high earthquake risk, detached houses are mostly built with prefabricated modular building systems. For example; More than 560,000 detached houses in California were completed with earthquake-resistant prefabricated modular building systems. After the earthquake in Elazig this year, TOKI (Housing Development Administration of Turkey) builds village houses with this system. DORCE took part in production and construction of these houses.

If we list some of the advantages of prefabricated modular steel structures for the construction industry;

Earthquake Resistance: When prefabricated modular steel structures are designed in accordance with the soil structure of different regions, they bend, deform, but are difficult to collapse with their flexible and light structure during an earthquake. Therefore, by improving the space perception of prefabricated modular steel structures in earthquake risk areas; they should be evaluated as an alternative with changes such as color, texture, material, light and form.

Lower Carbon Footprint – The Use of High Strength Structural Steels Reduces the Carbon Footprint: Prefabricated Modular Steel Buildings have a low carbon footprint due to reasons such as being pre-designed, construction in a shorter time and shorter equipment operating times. All materials used are recyclable and create less waste.

Ultimate Green Material Steel and Recycling: There are two ways a building can be considered “green”. The first is the way the materials help with operating costs, and the second is how the used materials reduce the environmental impact. Steel is one of the only building materials that can be recycled many times at the end of use without losing their strength.

Eco-friendly and its Impact on Traffic: Another factor contributing to the sustainability of prefabricated modular steel buildings is that the majority of the prefabricated modular construction process is realized off-site. The negative impacts of the project on the environment and the site are significantly minimized. Thus, while the number of vehicles and heavy equipment needed in the field and their use decreases, gains such as less environmental pollution and increased occupational safety occur.

Shorter Construction Time: One of the most important advantages of prefabricated modular steel structures is that construction can be completed in a shorter time than traditional methods.

Safety and Security: Prefabricated modular structures provide important advantages when evaluated in terms of work and worker safety. Due to the production carried out in our production facilities, the risk of occupational accidents decreases significantly.

Climate Conditions: Prefabricated modular steel structures can be produced in accordance with all seasonal conditions with current technologies and new materials. The interior insulation materials used in the buildings are selected in accordance with the climatic conditions of the geography where the project is carried out. For example, prefabricated modular steel structures designed and produced by DORCE are durable and sustainable structures from -50 degrees in Siberia to +50 degrees in Africa.

Portable, demountable and rebuildable structures: Prefabricated Modular Steel and modular structures are produced in the factory environment and shipped to the field. They are building systems that allow the use by demounting and assembling for reuse in different locations after the assembly is completed and used for the required period of time.

Plug & Play: It is a building system that allows a building to be entirely completed in the factory environment from the production to the final assembly, and the final connection lines such as sanitary and electrical installations can be sent to any region as one or several ‘modules’. Each module is built and shipped to the site, fully equipped with interior and exterior cladding elements, wall panels, roof, flooring, bathrooms, kitchen equipment, lighting. After the modules are shipped to the field, they are ready for immediate use, either alone or combined, depending on the intended use.

Emergency Response After Disasters: DORCE made donations, aid and completed projects by actively participating in disaster management through institutions such as AFAD (Ministry Of Interior Disaster And Emergency Management), United Nations and JICA after many earthquakes such as the 1999 Marmara Earthquake, 2003 Iran Bam Earthquake, 2011 Van Earthquake and 2020 Elazig Earthquake.