According to the “Fit For 55” program announced on 14 July 2021, within the scope of the “Green Deal”, the European Union pledged to reduce emissions by at least 55% by 2030, compared to 1990 levels. Europe is taking firm steps towards turning the EU into the first climate-neutral continent by 2050. Dorce Prefabricated & Construction received “ISO 14064 – Greenhouse Gas Verification Statement”, which is the first in its sector, within the framework of its responsibilities for a greener future.

Yucel Cebi, Strategic Management and Planning Director of DORCE, states that while listing what has been done so far for the “Green Transition”, DORCE has considered the ISO 14001 and ISO 14064 management systems, within the scope of the roadmap established to minimize the environmental impacts.

In parallel with the EU Green Deal Call, DORCE carries out all its activities with the awareness of responsibility towards nature. Some of the works that have been done so far;

Dorce will implement the “Green Transition” policies in the future by investments related to “Life Cycle Analysis” and “Water footprint” planning processes, together with carbon neutralization projects within the scope of the EU Green Deal.

While trying to increase the “Green Building” design and applications by supporting the above-mentioned goals, it was planned to benefit from the ‘Green Finance’ provided by IFC, which turned into an opportunity for Turkey.

Our company continues to invest in equipment and technology for green energy in its manufacturing facility while developing projects to increase the social awareness of employees and the audience reached through social media tools. Dorçe is very conscious of the environmental and social duties that fall upon it as a part of the sustainable cycle in the world. In addition, it continues to exist in a circular economy with a company model where employees are highly motivated and success-oriented . 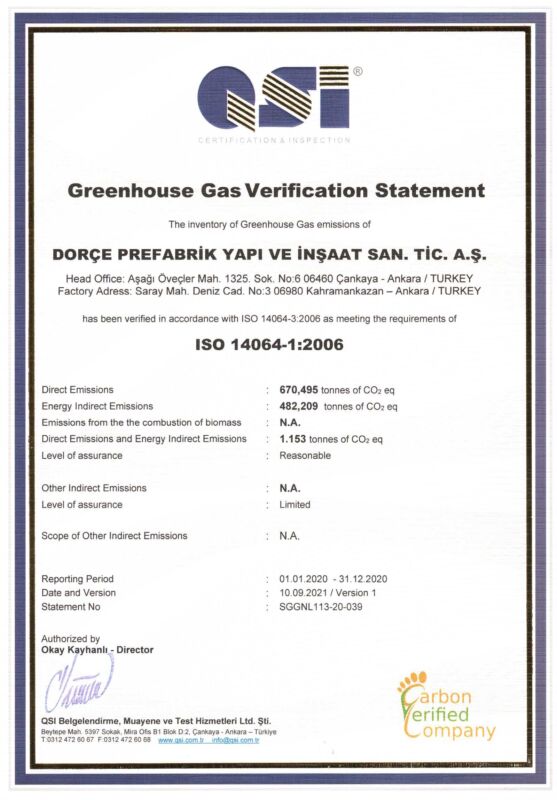