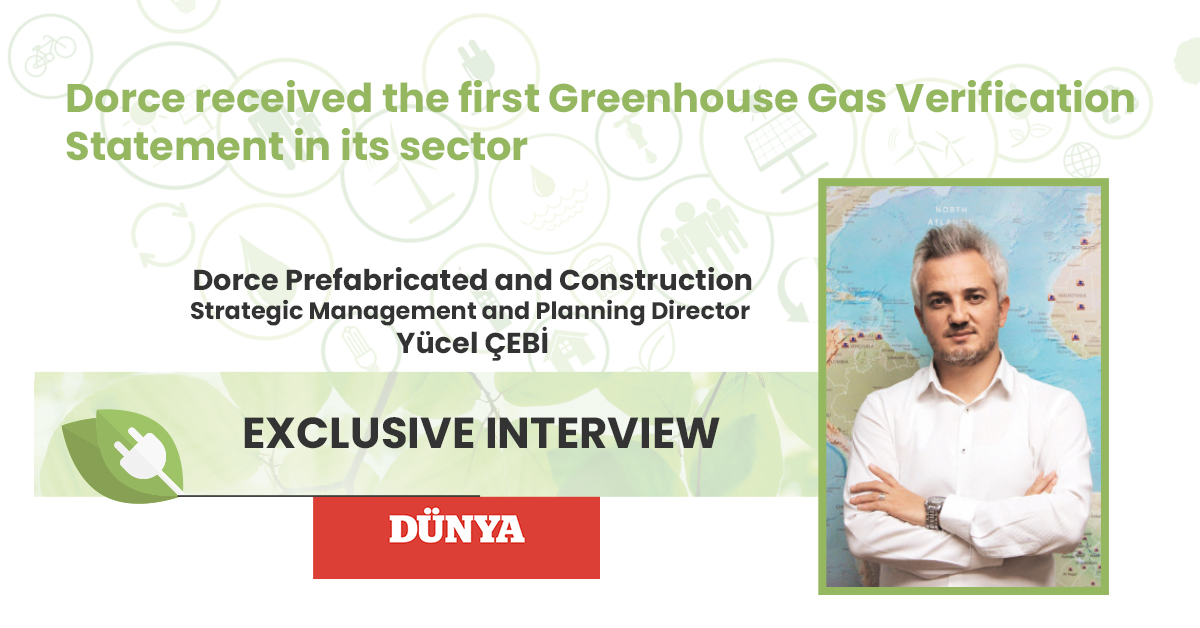 Strategic Management and Planning Director of Dorce Prefabricated Buildings&Construction Inc., Yücel Çebi, said that they received the first “ISO 14064: Greenhouse Gas Verification Statement” in the sector. Considering the carbon footprint certification that has already begun to be included in some tender specifications, Cebi emphasized that the certification will become mandatory in the near future. Cebi explained that this statement is greenhouse gas emissions calculations of direct and indirect energy consumptions (Scope-1 & Scope-2) and a verification document for the “Greenhouse Gas Emission” statement they prepared in accordance with the requirements of the ISO 14064-1 standard. Cebi said that The Carbon Border Adjustment Mechanism (CBAM) was prepared by the EU with the aim of being the “First Climate-Neutral Continent in 2050” and approved on 14 July, “This mechanism is an important tax regulation that has been implemented for carbon emission reduction.” Çebi pointed out that in the system that will take effect in 2023, the tax will be levied on greenhouse gas emitted for the products exported to the European Union. “Companies will be taxed on the products they export rather than the production conditions. This change will prevent the creation of carbon footprints by moving production facilities to countries where no regulation exists.” Cebi, who also gave information about the process of obtaining the certificate, stated that they first calculated the greenhouse gas emissions and prepared a report accordingly, and then had the process verified by an accredited company. “It took us 10 weeks to complete the whole process.”

“As Dorce Prefabricated Construction&Buildings Inc., we adopted an export-based business model.” Yücel Çebi said, “The greenhouse gas emission reduction is now included in the specifications of global companies such as BP, Shell, and Exxon Mobil, which are the pioneers of the oil and gas industry with high greenhouse gas emissions. A carbon footprint declaration certificate is requested in both supply and subcontractor contracts. Emphasizing that this process has two pillars, Çebi stated that global companies that emit large amounts of greenhouse gases in production cannot prevent this with current technology. “The global companies intend to solve the problem by doing business with suppliers and subcontractors that have received this certificate.” According to Çebi, the carbon footprint declaration which is preferred in some tenders today, will soon become mandatory.